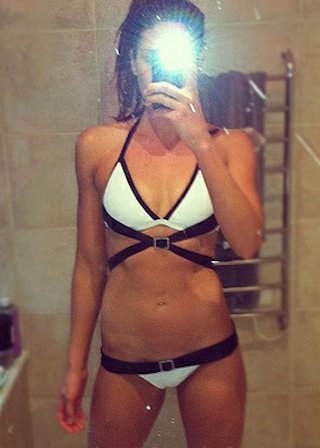 Have you ever gotten a designer bikini as a birthday present?   Swimmer Stephanie Rice has.  When Olympic gold medalist Stephanie Rice posted a photograph of herself in a sexy designer swimsuit she got as a gift from fashion designer Ellie Gansalve, she suffered some backlash from her fans from her homeland Australia.  A former Speedo sponsored athlete, Rice took to the more racy side of things when she showed off in this sexy wrap around bikini number from designer Ellie Gonsalve.  The bikini bottoms are admittedly rather low cut.

Ellie Gonslave has hearkened her avant garde designs back to the day of Norma Kamali with her bikinis that have wrap around string ties in the midriff area.  I think the conservative backlash is a tad out of control.  Kamali style swimsuits were in style decades ago in the days of the famed Tees beach in Santa Monica/Pacific Palisades.  She’s totally covered even though the swimsuit is pretty sexy indeed.  Apparently Rice has tweeted racy pictures of herself before which is what the hoopla is about.  She was dressed up as a police woman for Halloween and posted that picture online, also to a chorus of commentary.

I think Rice should be able to wear any bikini she wants as long as it has enough coverage of her personal areas which this one certainly does.  Granted it’s no Speedo but it is no more revealing than many micro tiny string bikinis that are sold daily online by swimwear retailers.  Plenty of celebrities post pictures of themselves in outfits even racier than this one.  She’s a big girl and can make her own decisions.  She does have a wholesome image to uphold which this swimsuit defies, but at the same time, she’s just a young girl having some fun.  It’s not uncommon if you consider what college peers at her age might wear.

Chalk it up to momentary insanity, hey it’s youth and after all she’s not exposed.  In this day and age celebrities have private home movies for sale and they survive those indiscretions.  The Victoria Secret’s angels walk the fashion runway in lingerie and wings for heavoes sake.  Rock stars dance wearing skimpy getups in their music videos.  Magazines like Maxim and FHM show their fair share of skin.  This is just a girl wearing a revealing bikini.  It’s a swimsuit you might see at the beach any day of summer.  The black strap detail is a bit Gothic and the bikini is skimpier than what the average male or woman likely prefers. But that is her choice to wear it or not to wear it.  Are you ok with this bikini or do you feel that she should have known better?

Posted by admin at 5:07 am  Tagged with: wornbycelebs

Swimsuit Secrets shows the hottest swimwear, sexy clothing and accessories perfect for the beach, resort or pool. Learn the secrets of how to look good in a bathing suit from a beauty expert. My style tips will help you shop online and choose the right cut, color, swimsuit styles and beach cover-ups to diminish common figure flaws. Are you over weight, flabby, jiggly or do you lack shape altogether? Get free tips on how to visually take off the pounds, add curves where you need them most, and flatter your figure type. Prepare yourself to stand out in the crowd and look hot this summer. After you learn all of my tricks to enhance your figure I guarantee you will be wearing the perfect designer swimsuit and pool-side outfits. Now you can style yourself to look fashionable, younger and gorgeous.

10 Tips to a Beautiful Summer Body

Swimsuit Secret swimwear blog brings you the best of the best women's swimsuits & designer swimwear. I absolutely love Victoria's Secret and other top swimwear brands from Venus to VS to the smaller boutiques and designers. I locate best buys, shops and bikini brands. I cover bikinis, tankinis, one-pieces & monokinis, cover-ups, beach dresses & plus size swim. I try to find the top selling swimsuits to flatter a womans figure and help conceal or downplay common figure flaws. I'll show you how to shop for and find the best swimsuit to conceal a woman's natural imperfections and accentuate assets to look her best. XOXO Swimsuit Secret

Victoria's Secret is a favorite of mine of course. To visit VS swim go to their swimwear store and online catalog at Victoria's Secret Swimwear. But wait Victoria's Secret is not the only store to shop at for swimsuits! Go to my Buy a Bikini page so you can surf the best of the net and shop at VS and more of my favorite online swimwear stores. Don't get depressed when summer swimsuit season hits or feel that you are too fat or unfit to be seen in a swimsuit. You are not! There are so many fabulous designers on the web and incredible smaller swimwear boutiques that are online to check out. They cater to all body shapes and sizes. You're 100% sure to find a swimsuit that looks stunning on your figure after reading through all my swimwear beauty tips on this blog.